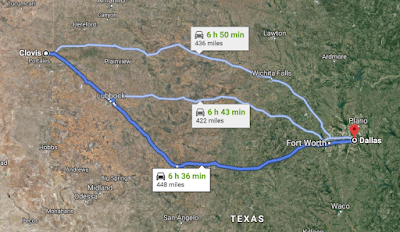 I needed to get to south central Texas to visit with Economic Development people in anticipation that Seethuma's Lab would likely be sited somewhere around Houston.


First stop though was Dallas.  I decided on the 'southern' route as it would give me the most Interstate driving.  Going through Fort Worth and Dallas during rush hour was going to slow me a little at the end of the day.

I was here to meet nephew Erik but he was tied up with work until the late evening so we planned on getting together for breakfast before I turned south.

The plains of Texas offer about the same as New Mexico, ie not much.  Only one view was worth it and it only lasted a few moments, coming out of the high plains of Western Texas to the plains of Central Texas east of Abilene.  Trust me, it wasn't worth the wait.

I'm sure you can see the difference.....not.

There is one thing that I have seen a lot of on this first couple of days that I would see a lot more of:

Wind farms.  Lots of wind farms.  And with VERY few exceptions, more than 3/4ths of those turbines were NOT moving.  Blame the weather, blame the time of year, but I saw a lot more statues than moving generators.

I pulled into Dallas just about 7pm and settled in after a burger and a Fanta.