Waking up in Kearney the Sun was shining but the haze of humidity made it look like fog had just burned off.  I dressed and packed quickly.  This was going to be a big day of driving.  I didn't get to North Platte as planned but was surprised how close to Denver I was.  I had planned to reach Denver by lunchtime and even stopping short of North Platte was not going to harm that plan.

I got a sausage biscuit, milk and a Fanta and was on the road by 8:15a.  I looked at the mileage and figured on lunch and gas in Denver.  I wanted a full tank heading into the mountains.

As noted, Nebraska doesn't offer much scenic awes.  And the western part of the state is no exception. 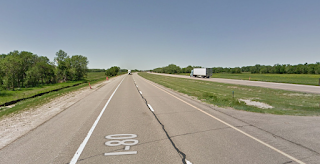 The only odd point is that the time zone change doesn't happen at the state border but well before it.  Maybe they just wanted to be considered 'Mountain' to alleviate the 'plain' landscape.  But VERY shortly after crossing into Colorado and getting off I-80 and onto I-76, the landscape changes and we start our slow climb into Denver.  Five thousand feet over the next almost 200 miles of bare rolling hills and bad radio reception.  I hate this stretch. 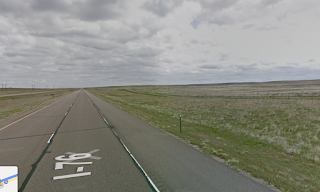 Not for the lack of views, but because I got a very expensive 30+ miles over the limit speeding ticket on my very first drive through here back in 1978.  Assholes.  I had to travel to the courthouse and pay the fine before being allowed to continue.  It was my SECOND ticket in as many days.  The other was of course in....NORTH PLATTE NE!  I really hate this stretch and though I've driven it 5 or 6 times since without incident...it still grates to this day.

I got to Denver (Alt 5,278': Basically from this point all location signs have ALTITUDE instead of POPULATION figures!  It is more relevant as most places in Colorado are small towns) around 1pm and spent 45 minutes getting some Arby's new Kings Hawaiian Bread sliders, a Fanta and gas.

Maybe it was the weight of the gas or the thinness of the air, but the 'get-up and go' of the car had definitely left.  I climbed out of Denver to Loveland Pass mostly in the right lane as a slow-poke. 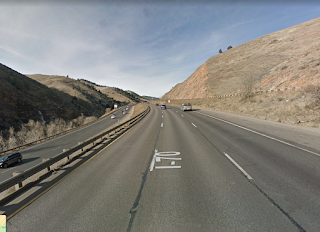 And the mileage hit - DAMN! -  as low as 19mpg on some of the climbs.  I didn't start looking for my target sign SCENIC DRIVE until I passed Vail.  By then I noticed that the average mpg was actually better than I expected, over 38mpg.

Okay...not fair showing it as I saw it...during the summer.   Here is a shot of it in the winter.  Just know I've never been there then!

Loveland is generally the last stop if winter storms are slamming Colorado's mountains.  They close I-70 and turn everyone around.  Chains are required to be carried by trucks.  The Pass is dominated by the Eisenhower Tunnel through the mountains.  The tunnel is 800 feet below the Pass' 11,990 foot summit.  I have a picture of me at the actual summit sign taken by Victoria during our 1994 trip through the area.  It is not the only tunnel on this stretch.  Mountain tunnels amaze me.  As a feat of engineering they are more difficult than building 100 story skyscrapers.  Note we have a harder time going to the bottom of the ocean than into space. 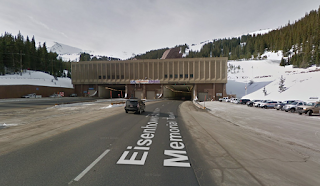 I stopped at Grizzy Creek reststop to get ready for what I expected to be a 3-4 hour run in the mountains with no services.  The stop is buried in the canyon along the Colorado River. You can jump into the river, drop a raft or kayak or just walk on the rocks along the bank - something I did with CJ on the trip we found Victoria's Resting Place. Amtrak's California Zephyr runs along the river too and it was passing as I got out of the car.  I waved at it's Observation Car but didn't see anyone return the gesture.  Rafts were making their way past the stop at the same time and I knew from the last time in the area, the water was cold!  A map in the building gave me hope that my goal was soon to be in reach! 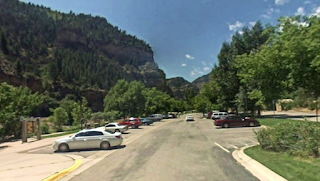 Victoria and I passed through Glenwood Springs several times over the years and even CJ liked one of the tourist gift stores we stopped at once.  We occasionally thought of moving to the area just south of Glenwood and changing our last names to Snow.  The mountains are right in your face along the roads and snow is noticeable on the peaks year round.

I didn't really worry that the sign existed prior to Glenwood Springs but watched nonetheless.  At Glenwood Springs I noticed they had a CULVERS!  So I stopped and grabbed a doublescoop chocolate sundae with strawberries and settled in for the search. At the time I thought this was the furthest West Culvers had come but, nope...

It will be the next exit!  Ok...the NEXT exit.  For sure the next one.  Surely it has to be this one, we are getting closer to Grand Junction and I know that is too far.  I set a limit.  Parachute CO was too close to Grand Junction and if I didn't see the sign by then I was going back to Glenwood Springs and take 82 down to 133.  I was fairly certain that WASN'T the right path, but I didn't even see roads going south into the mountains anywhere.

Forty-five minutes out of Glenwood I hit Parachute and turned around.  It has been 13 or so years since we were here, the sign could have been taken down, destroyed in the winters or I just plain missed it.  By the time I got back to Glenwood it was after 6pm and I only had two hours of sunlight.  Well, three actually because the local time was Mountain and my start had been in Central time.  I didn't change the clock on the car or my notes until I woke up in the new time zone.

Shortly after turning south on 82, I ran into roadwork that dramatically slowed me.  Miles and miles of work with huge (for the location) traffic jams.  I was even out of Fanta but didn't stop.  I finally made it to 133 and was the only car that turned off.  Two lane mountain driving is amongst the most scenic of drives and this was no exception but I also knew, KNEW I was not on the right road. 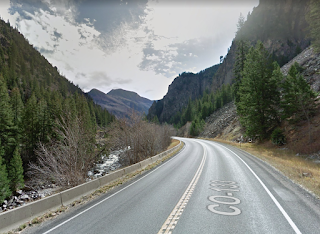 My only hope was I would come out on the backside close to the right place.  I eventually ended up the middle vehicle of a three car caravan through the mountains. 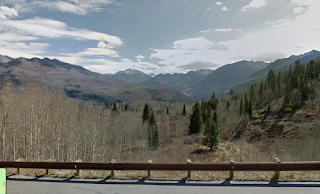 It was considerably GREENER when I was there! More than an hour later I hit Delta and knew I'd missed any chance of finding the right spot today.  I headed north to get to Parachute to double check the last stretch of road prior to Grand Junction and get some dinner.  It was getting dark and my choices were to stop in Grand Junction for the night and resume the search the next day or abandon the search this time and just head back to San Diego and more map work.

I got a burger and chicken sandwich along with another Fanta - I'd been dry for hours and hit the road.  Full on dark as I planned to hit the I-70 / I-15 interchange and figured there'd be a place to crash there.  But before I could get there, I had to cross the STRETCH.... 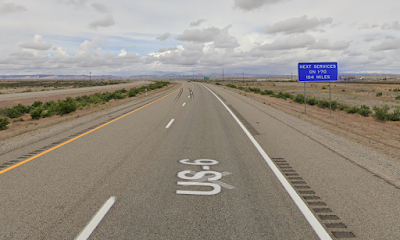 I stopped in Green River and got gas. I figured I could make it all the way, but I didn't want to risk it.  Believe it or not, I was getting 42mpg with all the mountain driving and I had 532 miles on the tank and it said I had almost another 200 still available.  Still, it was almost 10pm, dark and I was crossing a stretch of road with nothing on it.  Really, nothing.  There were times when I went 30 minutes without seeing another vehicle on my side of the road.

The Moon was getting close to full so, turning off my headlights I could just make out the road but at 70mph I wasn't going to risk it for long.  I DID get to see this though even in the darkness: 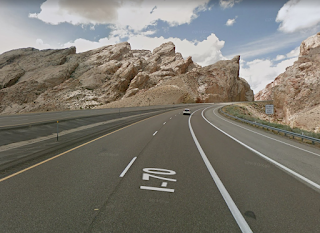 But the dullness of the ride at this point was not drowsiness inducing.  It was midnight and I'd been in the driver's seat for 16 hours.  Call me the Energizer....or I was just Fanta induced sugar alert.  My plan of finding a place to stay at the interchange was calling me.  I passed through Richfield UT that had plenty of potential sleeping places but I wanted to see how far I would have left to go when I made the turn.... 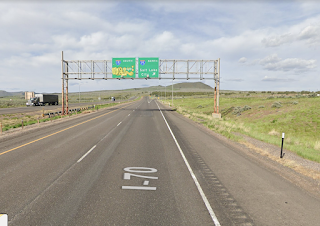 Which had ABSOLUTELY NOTHING around it.  Sigh.  I was going to have to go some distance before finding something.  Fortunately not long.  Less than 30 minutes later I would pull into Beaver UT with a Super 8 right off the exit ramp and plenty of rooms.  It was 2am by my clock and 1am local.