Crossing the desert southwest during the day, in the summer, is an exercise in man/machine balance.  The road surface can be hot enough to cook food on and tires can actually get softer as you travel, especially at speeds over 70mph.  And the Sun beating on windows can challenge even the best air conditioning.

So, I cheat.  I make the first day of travel east at night.  Now, the air temperatures don't moderate that much during the peak of the summer, but surfaces tend to let off their heat quickly making it a little easier on the vehicle performance.

I got up as usual and planned on a good nap late in the afternoon.  I left my packing for today because I knew it wouldn't take long.  Except, well, it did.  I started thinking of temperatures and potential weather changes and then tried to minimize the amount of clothes for each potential situation.  Over the years of traveling with CJ and Victoria we had a pretty good system: one big suitcase for Victoria and me, a small suitcase for CJ and a bag with all the toiletries.  A snack bag rounded out our needs.  I was only 1/2 way done packing and the big suitcase was full, as was the small one.  I thought I had a garment bag but had to borrow one for my dresses (just 3) and suits.  But the rucksack bag that had NOTHING but shoes and purses was just nuts!  Sigh....this wasn't going well.  Adding makeup and jewelry and toiletries, and since I was driving, a makeup mirror and light added two more bags.  By the time I was done: two suitcases, garment bag, three overnight bags, a rucksack bag, a book bag, my laptop and two pillows.

I needed Skycap just to get everything TO the car...

Unfortunately, work beckoned and I spent 2.5 hours getting petitions ready that I had not planned on doing.  Along with packing and getting the car ready, it was already 5pm and I really needed a shower. I tried to relax in my chair but if I was leaving by 7pm I didn't really leave myself any time for a good nap. I ended up resting, but not actually sleeping for 45 minutes before getting up and getting myself ready.

7pm came and went with me still sitting in Lemon Grove.  I kept looking at the map of the first leg and realized I was going to be getting to Las Cruces really early.  I had touched bases with Deanna to have breakfast but if I left at 7pm, I'd be getting to LC around 6am.  So, I ordered a couple of pizzas for me to have something to eat and to treat my neighbors for the loaning of the garment bag (that one of them had to go to their storage unit to dig out!).  I ate half a pizza.

I finally hit the road by 8pm with a full stomach and tank of gas.  Oh, and a large Fanta Orange from McDonalds.  That orange was going to be a permanent companion on this trip but I did have my water bottle full and available too.

Trip counter set to 0.  Interstate 8 just a short jaunt away and into the mountains I plunged.  It would be dark by the time I got over them and faced, the desert. 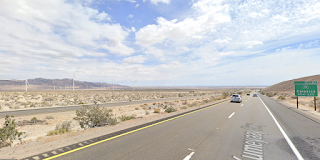 Traveling across the desert at night is not much different, if cooler, than doing it during the day.  There is nothing to see except vast expanses of barren mountains and scrub brush covered sand.  Hundreds of miles of the same scenes.  Now, if you've never been to the desert, seeing it for the first time is interesting.  I even recommend doing it, during the day, during the summer.  Get somewhere in the middle of it and get off at an exit ramp (there are plenty going to ....no where) and step out of your air conditioned car.

For people used to humidity, it will literally shock you.  My response to 'its a dry heat' is to suggest sticking your head into an oven.  It's a dry heat too.  Well, if the temp is 110+ and the Sun is shining, you'll get a good feel for the next turkey you stick in that well prepared oven.

Traveling alone, on empty stretches of desert highway seems to scare some people.  I find it relaxing.  No music or radio.  Just relax and enjoy the silence....as silent as your car is at 75mph.

Lest you think there is nothing to see if you travel during the day, at least via I-8, there is a place in the desert where it is not brown and shades of sand:

We are so rich, we plant crops in the desert.

Once I passed Gila Bend I would be covering new ground for me.  Normally I would cut north at Gila and head for Phoenix before heading even further north to Flagstaff before heading further east.  But shortly I-8 would merge with I-10.  I-10 and I would cover lots of new ground on this trip but only in segments.

Tuscon was the first stop for gas.  I wasn't going to need it but from Tuscon to Las Cruces, in the middle of the night, my options for gas were going to be limited.  A full tank in Tuscon was going to get me to Las Cruces and beyond.

About 100 miles west of Las Cruces I realized I was still going to be REALLY early.  I had made good time and figured this was a good opportunity to take that nap I had missed all day Friday.  I pulled off and took a good hour nap.  It had finally dropped below 100 and was in the low 90s.  With the breeze and the windows open it was comfortable enough.  Adding in the time change to Mountain and I pulled into Las Cruces at 7:30a, 8:30a local.

I woke Deanna up and got her suggestion for where to meet into Maps and plugged into The Shed.  Like most 'neighborhood' places, it is not a tourist's place.  Deanna came in and we settled into catching up.  For some reason I thought her sister Michelle was in Clovis but nope, she was in Las Cruces too but was working and we couldn't see each other...but I would get a chance to see her shop!

Turned out Michelle was at the shop when we stopped by and I got a tour and a short chance to catch up with her.  While I was saying my goodbyes, their brother Christopher called me.  I left the girls and by 10a I was back on the road talking to Chris and off I-10 headed for my first 'stop', Clovis NM. 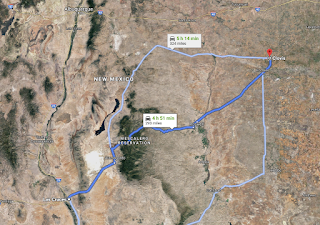 Forty-five minutes later, Chris was off the phone and I needed to stop in Alamogordo.  I was getting too sleepy to keep going so I pulled into a parking lot and crashed for 45 minutes.  Long stretches of nothing were now getting to me.  Even if the 'nothing' was actually, something: 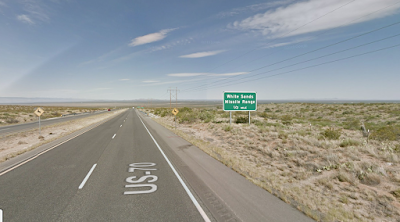 I wasn't going to need gas before getting to Clovis but I was going to be under 100 miles left in the tank.  Exactly how much I would have left was going to be an issue.  Turned out that I got the 'Low Fuel' warning just 5 miles outside of town.

The issue was...I didn't remember Steve's address (my brother in Clovis whom I kinda just assumed I could crash with!), AND...my phone had less than 5% battery.  I waited til I go into town before calling and he told me to go to 21st and turn.......phone died.

He wasn't home and figured where I was approximately and got close enough to watch the road for me.  We saw each other about the same moment and I followed him the rest of the way to his place.

Oh, I would have turned the wrong way.

It would be the 2nd longest distance day of travel but at the time I figured it to be the longest time : 995 miles from my house to Steve's.  It had been 21.5 hours since I'd left Lemon Grove.